A nip of the ol' Irish - Absolute Write Blog Chain

It's back and it keeps growing - but in a good way. The Absolute Write Blog Chain for March is not surprisingly focused on Ireland. Not much more to say, other than please check out the rest of the links once they go live. Should be some fun stuff this time around. 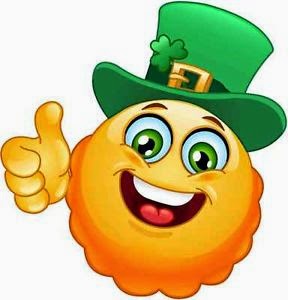 “Come on. Say it.” The stocky man staggered a little in his excitement and the woman behind him stepped clear with a disapproving look. He lifted his mug, his cheeks glowing in the dim light of the pub, and bellowed, “You can never take…our freeeeeedooooom!”

His diminutive companion scowled under his tweed cap, grabbing his own pint to secure it on the round table top when the other mug banged back down. Well, this evening’s gone arseways, Connor thought to himself. “I told ya,” he said. “I’m Irish, not Scottish.”

“What’s the difference?” asked the loud-mouthed fella with a stupid smile on his face.

“Two different countries, ya bloomin’ idiot.” Connor looked for an escape. He’d been looking for half an hour, ever since the large man decided to become his new best friend. “I’m headed for the jacks.” He took one last swig, knowing he was abandoning his pint, and nodded towards the rear of the establishment.

“But y’all sound the same. Y’all celebrate St. Paddy’s Day, right?” He seemed very pleased at himself for not calling it St. Patrick’s Day.

Connor simply walked away, too wrecked to continue arguing.

“Hey, you’ll come back, right? I’ll order us some of that Irish Scotch whiskey.”

“I will yea,” Connor shouted over his shoulder and ducked into the men’s room.

He emptied his bladder and eyed the only window, too small and too high for a dignified exit. Maybe if he was quick he could sneak out while the man ordered. He had no desire for spirits tonight, his one pint enough after several minerals. He hadn’t come to drink but to get lost among those who had.

When he opened the door he saw their table had been taken over by a couple of punks in leather and green hair. These people were all so different and strange. His should have known a tawdry Irish pub would make him miss home more than remind him of it.

He worked his way around the outside, conveniently hidden below even those sitting down. The large bouncer protecting the door didn’t even notice his passing. The night air hit him like a steamy bathroom, another reminder he was far from the emerald isle. He turned the first corner to make his escape complete.

“Hey, you forgot your whiskey.”

Connor stopped dead, the annoying man standing in front of him with two glasses filled with amber goodness. How had he beaten Connor out here? And why?

The man held out one glass and stumbled forward, spilling some of the liquid. “But it’s Jameson’s. Bartender said it’s the best Irish whiskey there is.”

Connor hardly agreed, but at least it was from the mother country and tasted like it did of old. He took the offering and the man wrapped a meaty arm around his shoulder and held his own glass out to the stars as a salute.

The correct accent caught Connor by surprise as they both downed their shots. He looked at the man a little harder. The smile was gone and his eyes seemed clear and sharp, glinting dangerously in the darkness. Footsteps echoed on the pavement behind and Connor craned his neck to see two large men walking purposely towards them.

The arm tightened around his shoulder. “Now, me little friend.” The words rolled out with an accent as pure as County Cork. “Let’s talk about the real Eire and the gold you be hidin’ somewhere around here.”