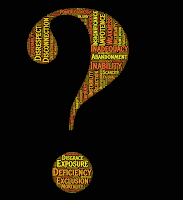 "No girl would do that. You have to change that part."

That's what the agent said. He'd read my first chapter as part of a private consultation at a writers conference, and his feedback was generally positive and supportive. I had already attended one of his talks and found him to be very knowledgeable with a long career in the publishing industry. He knew his stuff and he was telling me my story wasn't believable.

Specifically, he referred to a scene where my main character, a high school girl, stands up to a bully and stares him down with a threat of physical violence. To be clear, she's big and physically strong, but the guy she's facing is bigger and stronger. And a total a-hole who just made a racist joke. So the sentiment is fine, the agent said, but he was adamant that girls just don't do the whole physical confrontation thing, especially not towards a boy. I had gotten it wrong.

My immediate response was self-doubt. I think that's the default for most writers: assume the criticism is deserved and we failed. Because we know we fail a lot. We fail and fail and keep trying until someone, somewhere tells us maybe we got it right. So I believed him, and in spite of his other praise, I left the consultation demoralized. This was doubt with a capital D, maybe a few exclamation points and sad emoji. I had tried so hard to create a strong character, not just physically tough, but a strength of character. One who fails and cries and often has no clue of what the right thing is or how to do it, but when she has clarity there's no hesitation on where to come down and she's willing to put everything she has on the line. That's believable, isn't it?

When I got home I shared the day's events with my wife, as I normally do. She immediately sensed my frustration and sadness, as she always does. She didn't give me a pep talk, she didn't praise my writing (she does that often enough). Instead, she told me a story of her own. About how, when she was in high school, some boy made a sexist comment to her friend and she slammed him against a locker and made him apologize.

That's why I love her so much: for knowing I needed that story and for being the girl in that story. That's why I want to write these stories. The agent wasn't a misogynistic jerk. He was a really nice middle-aged guy who actively encouraged female writers and liked the idea of books with Strong Female Characters. But his view of what that meant, of what girls can be, was limited by his experience and most likely society's expectations. It may even be accurate on the average, but it is not all-encompassing.

I'm not saying my character is the perfect embodiment of what it means for a girl to be strong, and I know other writers can, will, and have done it better. I'm sure I'll get stuff wrong. I'll fail again and again.  But not this time. Some girls would do that. Some of the very best have done that. Those girls deserve to have their stories told.