My last post was about the otherworldly and why we like to be scared. We like to be scared by things we're not really afraid of in real life. But there is something going on that does scare me. Really. It's the world of publishing.

Writing is fun. Having other people read your writing is scary. But I can take that. It's the vast randomness that is the publishing world these days that I find frightening and confusing. Now, I understand the basics. I know how the traditional trade publishing system works. I feel I have a grasp of self-publishing, eBooks, and Print-On-Demand. But what actually works? Where are things going? What should I be doing? These things are harder to figure out. 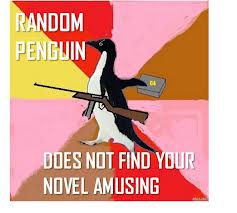 Today there's a bunch of rumors of Random House merging with Penguin Publishing. Aside from the cute possibility of a Random Penguin imprint, the ramifications are scary. Instead of the big six we'd be down to the big five. And they would have about 25% of the market. That would give them to power to fight Amazon (something they seem to want to do). If two behemoths battle, it's the ants that get crushed underfoot (ants = writers).

On the other side of the coin there have been several revealing  reports that some of the best-selling self-publishers got that way through questionable means - paid reviews, gaming Amazon algorithms. How can an simple, honest person expect to compete.

In some ways, it's an exciting time to be a writer. There are more choices and possibilities than ever. But that also equates to uncertainty and frustration. Every time I think I have an idea how to move forward the target changes. In the short term, I think it's time to just write for a little while and come back to the publishing when I'm fully loaded. If I keep shooting, I'm bound to hit something.
Posted by Unknown at 5:00 AM