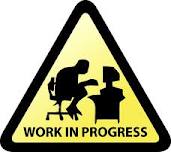 All writers have a Work In Progress, or WIP. They may actually have several. Even if they're not writing they are at least thinking about an idea, so that counts as a WIP. Or maybe they have a completed story that's sitting somewhere in the trunk waiting to be polished a little more. That counts, too. We always have something that we can claim to be working on, no matter how slow our forward progress.

At the moment I'm pretty happy with the headway on my WIP. I completed the rough draft about a month ago. After letting it sit for a little, I've now gone through a first edit and rewrote the ending to make it more of a stand-alone. (Originally it was the first in a trilogy. Technically it still is, but it wraps up a little better on its own now.) This is what I call the first draft - that means it's actually ready for people to read.

So I'm starting to look for Beta readers. (that's just fancy writers' terminology for someone who reads a draft and hopefully provides some feedback. Writer's like their jargon). So if anyone out there is interested in reading a Young Adult novel, contemporary in setting with some slight speculative elements, with a strong female lead, a little romance and a little more adventure, let me know. I may not have much access to email for the next week or so, but I'll be back before too long.

Here's a little bit more of a description:


Emily just wants to make it through high school and get out on her own, the same as everyone else. Her mom wants her to be perfect, wants to control her life. She even wants to set Em up with the new kid, the son of old friends. Not that Holden’s all that bad, he’s actually kind of cute and really smart. Too smart. And too strong. But that’s not the point – it’s what her mom wants so it’s the last thing she’ll do. Em only does what she wants.

But when strange government agents try to arrest her, everything spins out of control. Holden helps her flee, but not before the agents get her mother and his parents disappear. Em is on the run with a boy who is not what he appears. Everything she knows about her past is wrong. All history is a lie. If they can make it to San Francisco they hope to find the man who has the answers. The man who can help them find their parents. Em doesn't get to choose this time, she has to succeed if she ever wants to see her mom again.