The blank page - friend or foe? 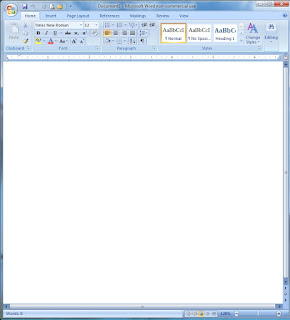 One of the most daunting things a writer can face is a blank page (or blank screen these days). That pure white represents the ultimate freedom, a canvas waiting to be drawn upon. But where to start? What words do I put down? What if my brush strokes are clumsy and halting. The whole world lies before you while also being on your shoulders. It's a freedom and burden that is exhilarating and terrifying. So how do you handle that? Here's my experience, draw upon it as you will.

When I got serious about writing I started with short stories. It was good practice and I could work out most everything in my head. Then I'd sit down and just type it out. No problem. Once it was all done I could see the complete thing and make changes and edits. The screen never worried me.

When I was ready to start my first novel I again had the whole idea worked out in my head. But for a novel, this just meant the plot. I couldn't work out all the little details - that would be too much to hold onto. But I figured all I needed was the story, so once I was confident in that I sat down to write. That's when I realized my mistake.

The first scene was the two main characters meeting. In the scope of the plot, that's all it was about. But when I tried to write it, I didn't know what to write. I knew where they were meeting, I knew all about each character, but that was it. Was it day or night? Did they just say hello? Was it an average day? Was one of them busy or stressed? What were they wearing? How much information would they share with each other? I just didn't know. So the blank page won that round.

I stepped back and went to my outline. No longer was it a simple fleshing out of the story. I refined it, made it more detailed. I broke it into chapters and developed a summary of what, exactly, happened in each. It became a series of short stories that interconnected. But I could handle a short story; I could wrap my head around the individual chapters one at a time. So when I sat down to start the novel the next time it was easy, just write the first chapter; it was all set in my head.

But after completing that first chapter I realized it wasn't very good. The character's voice was off. It didn't convey all the complexity of thought I wanted. It didn't lead me where I wanted to go for the next chapter. The facts were right, but it didn't read well. Basically, it sucked.

So I tried to rewrite it. Not edit it, but start over. Again, same result: weak writing. I didn't want to go on until I got it right. The start is the most important thing - everyone know that. Why write a whole book when the opening will lose any potential readers. The page was no longer blank, but I was still defeated.

Then I came to the great epiphany. Not that this will be news to any experienced writer, but it was a major breakthrough for me. My writing sucks, but that's OK. Don't worry about it, just keep writing. And as I wrote I started to find my character's voice. Each chapter got better, and my outline allowed me to fly through them. When I finished the whole thing (in two months) I came back to that first chapter and erased it. I now knew what I wanted to say and where it needed to go. I rewrote it with the experience and history of an entire book behind me and it worked.


A bead of sweat rolled off his brow, down his cheek, and caught on the mask hooked behind his ears. He tilted his head to get the following drops to flow to the side as he tried to block out the wail of the boy’s mother. He couldn’t see anything through the flow of blood and he knew this wasn’t going to work. He needed help.


So now I don't let blank page intimidate me. I can fill it up with anything. As long as I'm writing, it will improve. And anything I wrote in the past I can change. The world does lie open before me and that's a wondrous thing.