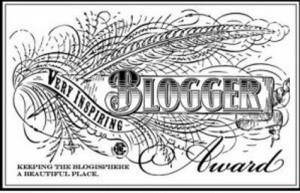 I've been awarded a Very Inspiring Blogger by the kind and generous Christina over at The Muse of My Imagination. Thanks so much - you should all check out her blog for some great writing (and pictures of Forks, WA :-) ). So I'm to tell y'all seven things about myself and send you on to a few folks who have inspired me. I don't like talking about myself that much, but here goes:

1.  I grew up in Minnesota. In a small farming town near the Mississippi River. It was a great place to grow up but I got out as soon as I could. The people are nice, the summers are gorgeous, but I really hated the winters. Yes, it really is cold and miserable there.

2.  I now live in California. It's much warmer here (it's 65 degrees and sunny in the middle of February as I write this). I like the fact that I can go visit the cold in the mountains if I want, but I can still do normal things - like walking or breathing - outside in the winter without inhaling ice crystals.

3.  I wrote a screen play twenty years ago when I was living in Los Angeles. I never tried to sell it or anything. I never showed it to anyone. I had no desire to try to get into the movie business which dominated the social landscape. It was just an idea that I had that I really liked and wanted to write down. Since I see stories in my head a screenplay seemed the right format. But I knew even at the time that it was an idea that wouldn't be of interest to the general public and had no money-making potential. Someday I may go back and clean it up, but it sits in a file with poor formatting and clunky dialogue. But the idea's still cool.

4.  I'm a dog person. Don't have my own at the moment, but have a few surrogates around. It's not that I dislike cats, but they can't compare to the warmth and friendliness of a dog.

5.  I'm a big Joss Whedon fan. Started with Buffy, but really hit with Firefly. Though anything he does is magic. He inspires me to create great and diverse characters and to always remember that however grand the story, it's the people that we love.

6.  I spent a year in Scotland. My junior year abroad at the University of Edinburgh. I've never been back but it's the one place I really want to get to. But not for a quick visit. I want to go back and spend a few months exploring the places I was too busy to see when I was in school. It's a magical land of hills, lochs, and friendly folks who talk real funny. It was a great time.

7.  I've never been to a writer's conference. But that's about to change as I am headed out the door to one this weekend. Not sure what to expect and a little nervous about sharing and talking about my work. But it's a part of the process and I hope I get a lot out of it. I'll let you know how it goes next time.

So that's more about me than I would normally tell on a first date. I'd rather have people assume whatever they want about me as they read my work. That's what's important to share.

In the spirit of the award, here are some people/blogs that have inspired me. I know that some of them don't do awards and won't be posting about themselves, but they are still worth checking out to get some useful information or inspiration. Thanks again, Christina, for sending this my way.