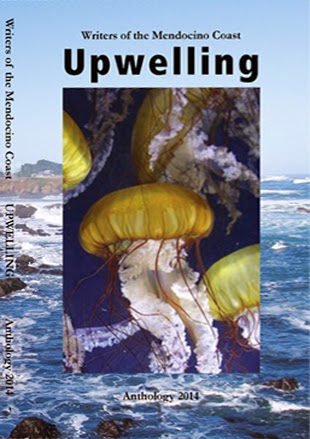 Several months ago I moved to the Mendocino Coast. Two days after I arrived there was a meeting of the Writers of the Mendocino Coast - one of the California Writers Club branches. I went just to check it out - I'm not really into clubs in general but I wanted to see what this new area had to offer. Well, there were a lot of nice people and the presenters for the meeting were from a local writers group that talked about how their group works. I joined up and as part of my membership I received a copy of the club's first book.

The Writers of the Mendocino Coast puts out an annual anthology of short stories chosen from member submissions. The collection has a loose theme, open to any interpretation. The past year's theme was On the Edge, fitting for a region know for it's cliffs and dramatic landscape. At the meeting they mentioned that the deadline for submissions for next year's anthology was a few weeks away. Busy with the move, I hadn't written much of anything in a while and saw it as an opportunity to get the juices flowing again.

Short stories are not my thing. I like them, but have problems writing them. Every idea I have is too large; my attempts end up reading like a chapter out of a novel. Novels are where my mind naturally goes. Short stories are a different beast, and it's something I don't feel I've mastered. But I came up with a great idea that matched this year's theme: Upwelling. I was all excited and when I started writing it flowed easily.

Too easily. The limit was three thousand words and my first draft was over four thousand. And it didn't even include half of what I wanted to put in there. Once again, I came up with a great plot for a novel - maybe a novella - but just too much to fit into the space assigned. I starting whittling to see if I could get it under the limit.

While this was happening I got invited to lunch by the president of the club. He wanted to welcome me to town and the community. We talked about books and writing, of course, and I mentioned I was working on a piece to submit to the anthology. He said he'd be happy to take a look at it. I eagerly accepted - fresh eyes could help me figure out where to cut. I finished off my latest draft and sent it off.

His feedback was helpful but mostly it demonstrated to me that I was still trying to fit too much in there. When I cut some stuff back the story didn't really work. I had an arc and theme that needed multiple scenes and characters to carry it through. When I reduced it down it lacked the richness that had inspired me in the first place. By now the deadline was a week away.

I had something that was okay, something that I could submit. But I wasn't happy with it. At the eleventh hour I decided to change it up. I took one element of the story, one scene that held the heart of it, and rewrote it from scratch to be a complete story unto itself. It worked. I like the result and only wish I had had a little more time to edit it myself before submitting.

Most importantly for me, the process had got me back into writing. At the same time I worked on the story, I dove back into rewrites on my novel. The president of the club also invited me to join his writers group, the one that had presented at the meeting. That has turned out to be a great resource and invaluable in helping me improve my writing.

So involved in my current writing, I had almost forgotten about my short story until I received notification that it had been accepted into the anthology. I also got some feedback from the member who was editing the book. It was nice to be able to fix up a few things, but I didn't change as much as I might have wanted for fear of turning it into a never-ending process.

In the end I am quite happy with my little story and proud to say that my writing has now been published. I got my copy of the anthology the other day and there are a ton of great stories in there, making me proud to be a part of this book and this community. Here's a sample - you'll have to buy the book to read the whole thing :)

Heavy Pull
by Blair B. Burke

Micah’s headlamp shed a beam of light through the darkness as he prepped the boat. He moved quickly with practiced routine, packing the small boat tight. Where the light cut the air it bounced off the water droplets that hung in the heavy mist, encasing the boat in a shimmering glow. He looked up the dock when he heard the bounce of footsteps headed his way.
“I didn’t think you’d make it, Schott,” he called out.
“Have I ever let you down?” Randy Schottover stopped at the dock’s edge and shaded his eyes from Micah’s light. He was wearing yellow bibs that were as bright as a rising sun. They were too large for his skinny frame and with his blue slicker hanging loosely he looked like a kid in his father’s clothes. He carried a small cooler in one hand and large thermos in the other.
“All the time, buddy,” Micah said with a smile. “But maybe things can change.” ...
Posted by Unknown at 4:00 AM