Well, it's the end of National Novel Writing Month. How did I do? Pretty well, I think. I made the 50k word goal. I actually finished the book at 62k words. I've even done a quick round of editing and have the book posted up at Smashwords. I'm going to leave it up there for a little. I think it's a good representation of what a first draft is like. I'm rather proud of what I accomplished in one month and I think it's great that so many people wrote so many words.

I'm going to take a little break from this book and then give it a thorough editing before deciding what to do next. Right now I'm thinking of getting some professional help with the editing and the cover and probably self-publishing. It's a good story if you don't mind lots of bad things happening and lots of bad people involved. I was asked the other day if it has a happy ending and don't think I can say yes, but the bad people get what's coming to them and there is some hope. Maybe not happy, but it makes me feel good.

Here's the final excerpt of mine and please follow the links below to the updates from my fellow Absolute Writers. 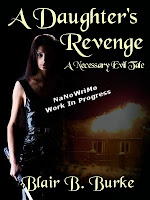 I shake my head. “He’s not really my brother. I just want the purse.”

Great. The stupid man doesn’t even know why he’s robbing the kid. I look to the boy to see if he has any thoughts.

So he hid it during his flight. Smart. I could try to track his route and might be able to find it, but it could be anywhere. If he’s any good it will be somewhere no one else will find it. It will be much easier if he’s alive to show me.

“Okay,” I say to the kid, “you duck and I’ll take care of the old man.” I catch the kid’s eye and look down at his feet, hoping he’ll take the clue.

“Wha?” The old man is confused and tightens his grip on the boy’s coat.

The boy stomps on the man’s foot and twists away from the knife. At the same time I lung forward and stab into the man’s shoulder. He squeaks and drops the knife. He also loses his grip on the kid who tries to make a break for it. I expected that too and I swing my blade into his knee. I use the flat so it only knocks him to the ground.

The old man is clutching his shoulder and I only lunge at him to make him run away. I bend down and pick up the knife lying on the ground before walking over to the kid who’s sitting up grabbing at his knee.

“I think you broke it,” he complains.

“Shut up,” I tell him. “I don’t care if you have to hop, you’re going to show me where you hid the purse. Then I’m going to take it. If I’m real happy about what’s inside it, I’m going to let you live.”