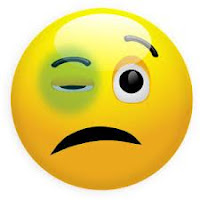 Last time I talked about how to give a critique (read the post HERE). This time I'll talk about how to receive one. For not all critiques are created equal, and you need to get as much as you can out of each and every one. [Part 3 covers fact vs. opinion]

To start with, be clear with what you want to receive. The more guidance you can give your critiquers the more likely you are to get what you want. What you want is going to depend on where in the process you are. If someone is critiquing my first draft, I generally want the big picture stuff. Is the plot consistent, the character's voice authentic, the story interesting? I'm not worried about a lot of the little things because they are likely to change when the big things get adjusted. There's no point in fixing grammar in a chapter that will get cut because it slows down the story.

On the other hand, if you're confident you have the story you want to tell, then you may want more feedback on the little things. And a double-check to make sure you don't have a random character pop up in chapter 23 because you cut the earlier chapter where he was originally introduced. Don't waste your reviewer's time by asking them to comment on things that you don't plan to change.

You also want to let them know how thick your skin is. Whatever the answer, it's okay. The thicker your skin the more you'll be able to get out of the feedback, but it does take time to develop. Let them know if you're looking for encouragement or feeling vulnerable about your writing. We all are nervous when getting critiqued and most people try to take that into account. It will be easier to get feedback that you can handle if you are clear at the beginning and ultimately it's only the stuff you can handle that will improve your work (which is why the thicker your skin the more you can improve).

That being said, it's natural to always focus on the negative. We go right to the spot that they criticize and wallow in the pain. So I always try to start by focusing on the positive. Make sure I take in what they liked and what I did well. Without that I'd just be lost in a sea of things that need fixing with no idea how to fix them.

When you do start looking at the criticism you need to consider the source. Critiquing is a skill, just like, but separate from, writing. Just because someone can write well doesn't mean their feedback is all good. Likewise, some people can offer great insight into your writing even if they can't create something themselves. I always consider who is saying something in addition to what they're saying. (just don't use that as an easy excuse to ignore something you didn't want to hear)

For instance, I try to get some people to read my books who are not writers. They're simply readers, ideally ones who read the type of stuff I write. Their overall impressions are great, but often they don't know the details. They also tend to have personal biases. If they say something was hard to follow, then I know I have to look at my structure, perhaps my point of view. If they say a character is weak, I have to consider not just the actions of the character but look out for passive verb construction. I translate their general impressions into specific writing techniques that relate to them and try to see what caused their feeling. If they say there weren't enough pirates, I might just blow that off as irrelevant. Not every book needs pirates, even if some readers like them a lot.

The other side of the coin is feedback from writers (a common situation since we often exchange work). Since we may have a copy of their work to critique ourselves, it's easy to dismiss their criticisms by mentally pointing out the errors we find in their writing. That's neither fair nor helpful. While I do think that writers will sometimes critique things that wouldn't bother a reader, don't base that on their writing but on their words. I pay close attention to how they say something. If they point out an error by referring to a generic concept - 'never have a character look at their reflection in a mirror' - I may disregard it as someone getting lost in the 'rules' and not paying attention to the story. If they point out something specific - 'she didn't seem like the kind of person to worry so much about her looks' - then I give it a lot more credence.

In the end, no one critiquer is going to be completely correct, just like not every reader will enjoy the same things. You will often get completely contradictory feedback from different people - I loved the scrappy sidekick/I hated the annoying tag along. It's when you receive consistent feedback you know you cannot ignore it. Your job is to weigh each and every comment with an eye on where it came from and try to use it to improve your work. The more open you are, the more you can look at the information objectively, the more you will get out of it.